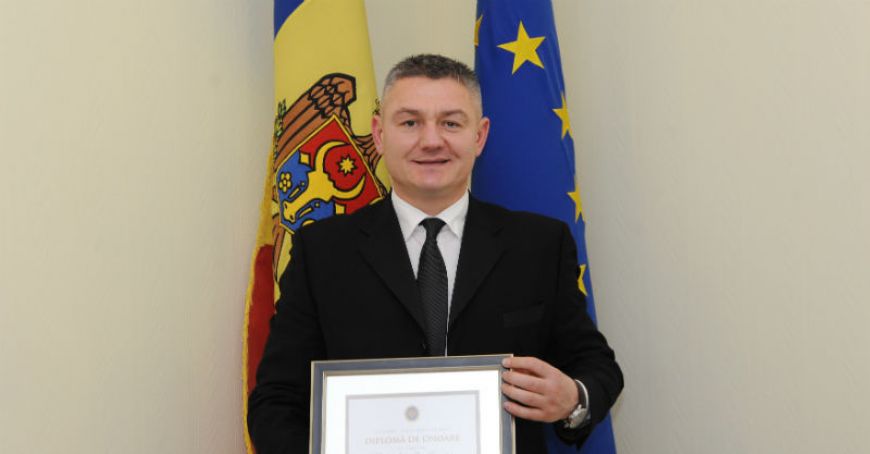 Swimmer from Moldova to get Nobel Peace Prize

The first man on the globe to cross the seven straits in the first attempt, Ion Lazarenco, will be proposed by the Government to Nobel Peace prize. The decision was announced today by Prime Minister, Pavel Filip, during a meeting with the athlete, which promotes peace and unity by means of swimming.

The PM  congratulated him on his achievements, but also on the birthday he celebrates today. Pavel Filip offered the tricolor as a present and decorated him with the Diploma of Honour of the Government. The Premier also submitted the candidacy of Ion Lazarenco to be decorated with the Order of the Republic.

Pavel Filip especially appreciated that although it has been established for many years in Ireland, Ion Lazarenco has always hoisted the flag of Moldova, being an ambassador of our country abroad. According to a poll conducted in Ireland, over 350,000 people have learnt about Moldova as a result of the athlete's performance.

At his turn, Ion Lazarenco has said that he is proud to be a citizen of Moldova, noting that each of us is obliged to do something to change things and build a prosperous country. In the context, the athlete specified that, being abroad for 23 years, he saw for the first time real changes and reforms implemented in Moldova, which bring visible results in more fields.

The athlete talked about his experience and the unusual moments during the crossing of the straits – he swam in extreme conditions near sharks, in waters with very low temperatures and strong currents.

Ion Lazarenco was declared: The best swimmer of Ireland for three consecutive years, becoming the first person on the globe to cross the seven straits in the first attempt. In 2018, the athlete was named The man of the year by the World Association of outdoor swimming.

Constantin Brancusi Square to be built in Chisinau

Hazelnut orchard to be planted by students in Mereni

PPDA will not back the Law on pension indexation