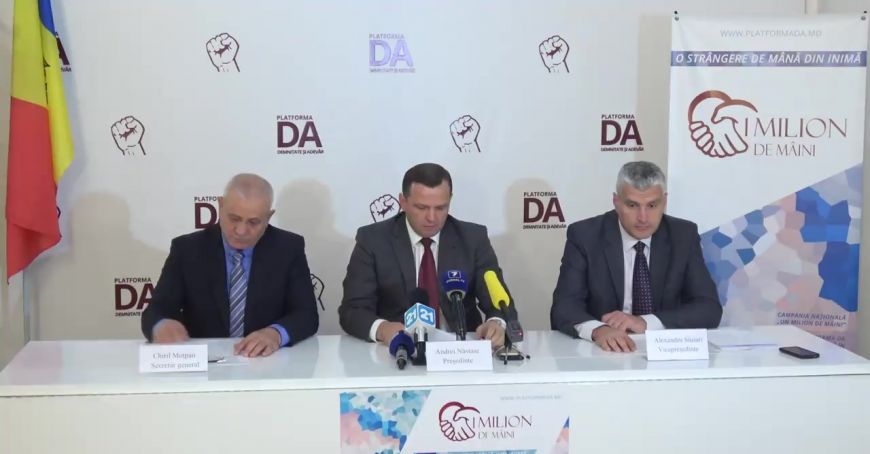 The political party Platform Dignity and Truth (PPDA) will not submit a candidate to the new parliamentary elections, due on March 15 in the uninominal constituency No.38 Hânceşti. This was announced today in a press release by PPDA. Under the statement, PPDA expressed regret that the pro-European parties did not reply to the request to submit a joint candidate, while mentioning that there is still time to identify a joint candidate.

In the opinion of the PPDA, one joint candidate represents a test for the subsequent political battles.

"Even if the independent sociological studies reveal that Andrei Năstase has the highest chances of victory in the No. 38 constituency, the DA Platform asked the pro-European parties to identify a common candidate, as the first test for the next political battles at national level. The DA platform regrets that the pro-European and national parties have preferred to submit candidates for this constituency without joint coordination, thus deviating from the principles that underpinned the success of the 2019 parliamentary elections”, reads the statement.

"DA platform respects its principles and makes a final effort for the unity of its right and its traditional alliances. Based on these circumstances,  DA Platform, in order not to disperse and finally upset the electorate, will not submit a candidate for the constituency no. 38, thus it will prove its consistency in his actions”, reads the statement.

Parliamentary elections will be held on March 15 in the constituency NB.38 in Hincesti district, after the democrat MP Alexandru Botnari resigned in favor of the seat of mayor of Hincesti.

Vlad Turcanu from the National Unity Party, Olesea Stamate, proposed by the Action and Solidarity Party, Ştefan Gaţcan, proposed by the PSRM, Ion Mereuţă from the PDM, Dorin Chirtoaca from the Unirea Political Movement are enrolled in the race for new parliamentary elections in the Hancesti constituency part of the Political Union Movement.

75 million euros for the project "Energy efficiency in Moldova" implementation

COVID-19: A person died and 82 new cases of infection

PPDA’s requests to the Government of Moldova

First case of infection with Covid-19 in the Gagauz autonomy

Tips to build a good relationship with your child