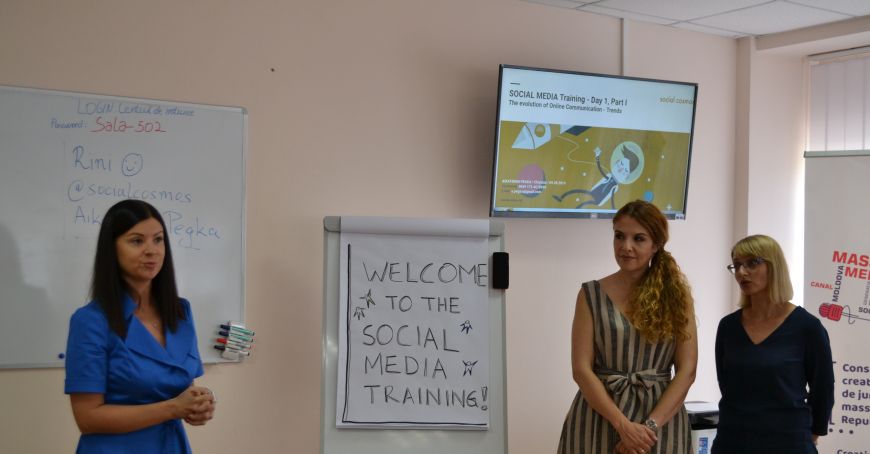 New training for journalists at the Public Broadcaster “Teleradio-Moldova”

„By this project, TRM intends to support the development of media professionalism and to promote responsible journalism at national level. Also, this project aims to improve the skills of journalists, by informing them about international standards in the media field”, said the president of the Public Broadcaster “Teleradio-Moldova”, Olga Bordeianu.


The first activity carried out within the project is the training "Social Media: Strategy & Leadership", organised by the international expert Aikaterini Pegka.  Journalists from various media institutions in Moldova participate in.

Gianina Vulpe has been working as a reporter in the "News and Debates" Department of Moldova 1 TV for almost half a year, reports Mesager.

"Social media offers us today to promote both personal opportunities and content that journalists create. It is important to know how to use this social media”, said Gianina Vulpe.

Journalists with a rich experience signed up for the training.

"I work in the offline media and for a while I wanted to migrate to social media",  said Andrei Bargan, media director, Cimişlia.

"We want to find out how to better elucidate, show and tell people in the online environment about social issues, so that together we can help people", says Valentina Coroleac, editor , GRT Gagauzia.

"We have high expectations from this training, to find out how to promote, to sell our products, to become known, to be informed", says Veronica Purice, editor at Jurnal TV.

Trainer Aykaterini Pegka is from Germany, she has been active in social media marketing for six years.

"With social media we have the opportunity to multiply messages, to transmit them globally. The purpose of the training is to change the mentality, to change the way people communicate with each other, to understand how changes occur and how to become a leader in social media”, said the trainer Aykaterini Pegka.

The project "Creative community consolidation of next generation of journalists and media professionals from Moldova" is implemented by the "Teleradio-Moldova" Broadcaster, being funded by the US Embassy.


"At the end of the training. we want everyone to understand that what we do on TV or on the radio must be in synergy with online, and as a result we will have a much better and more efficient result. Also, there were organized trainings with the EU support for specialists from Teleradio-Moldova. They will go to local TV and radio stations to train interested people”, said the president of the Public Broadcaster “Teleradio-Moldova”, Olga Bordeianu.

The project’s duration is 2 years. Over 300 employees of the Public Broadcaster "Teleradio-Moldova" and 300 others from other media institutions will be trained under this project.