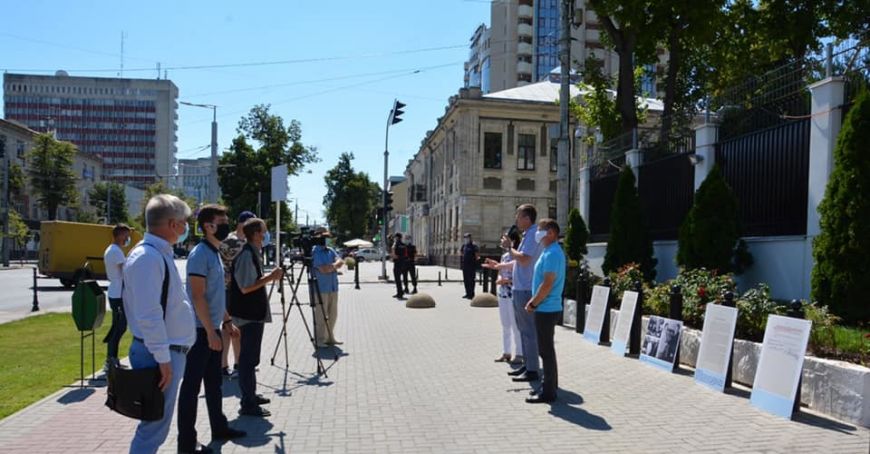 They ask the Ministry of Foreign Affairs and European Integration (MFAEI) that the ambassador of the Russian Federation to the Republic of Moldova, Oleg Vasnetsov, be declared persona non grata. Representatives of the Unirea Political Movement today picketed the Russian Embassy, dissatisfied with the statements of the diplomat, who claims in an interview for TASS Agency that no conditions are currently created for the withdrawal of the Russian army from our country, and in 1992 a fratricidal war took place, which Russia helped stop. In reply, the MFAEI says that it pleads for the withdrawal of the foreign military, but considers that a confusion has been created around the diplomat's statements, reports Moldova 1.

"21 years have passed since then, an international document by which the Russian Federation undertook the obligation to withdraw its army, ammunition, respectively, the military arsenal from the territory of the Republic of Moldova in the Transnistrian region. 21 years have passed, but they haven't done it and apparently they also need a magic wand for this," claims the leader of the Liberal Party, Doron Chirtoacă.

No representative of the Embassy of the Russian Federation came out to talk to the protesters, nor was any press release issued in this regard. Contacted by Moldova 1, Ambassador with special missions Andrei Popov did not answer the phone to comment on the diplomat's statement, but previously told a television station that the MFAEI continues to plead for the withdrawal of Russian troops from the left bank of the Dniester.

"We note, and we do so with regret, that in the statements of the Russian ambassador are deliberately confused the two elements of the presence of the Russian military on the territory of the Republic of Moldova. On the one hand, the stockpile of ammunition and the task force of the Russian army and, on the other hand, the contingent of peacekeepers. Obviously, there are two different things and, therefore, when the Moldovan authorities plead for the complete and unconditional withdrawal of Russian troops, they do so in accordance with international commitments," the official said.

Recently, in an interview for the Russian agency TASS, Ambassador Oleg Vasnetov stated that “Russia does not impose on the Republic of Moldova a vector of external development, but it will always protect its interests. At the same time, the diplomat says that so far no conditions have been created for the withdrawal of the operational group of Russian forces from the Transnistrian region".