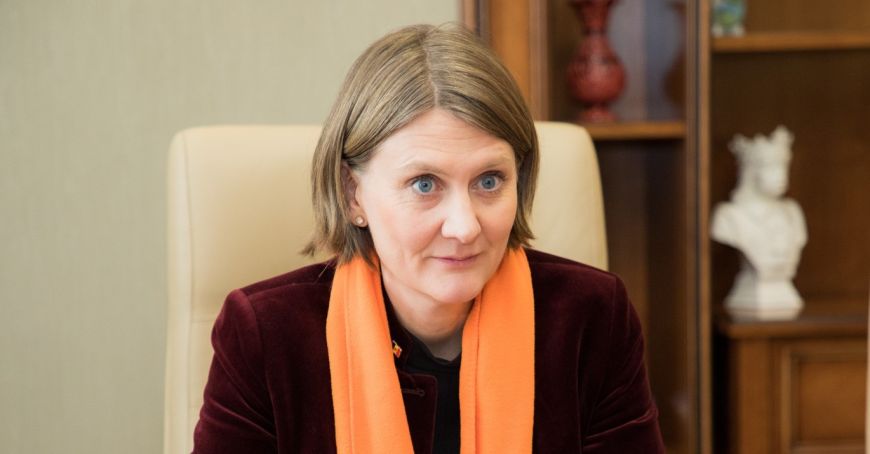 Interview with Anna LYBERG, Ambassador Extraordinary and Plenipotentiary of the Kingdom of Sweden in the Republic of Moldova,

The Kingdom of Sweden is one of the most important partners of Moldova, with projects in various socio-economic areas implemented by the Swedish International Development Cooperation Agency. Sweden also shares some of its experience with European integration, strengthening of democracy and promotion of human rights. Such aspects as well as references to the Swedish investments in our country are commented on in the interview given to Radio Moldova by the Ambassador Extraordinary and Plenipotentiary of the Kingdom of Sweden to the Republic of Moldova, Anna LYBERG.

You are the Head of Swedish diplomatic mission in Chisinau for over a year. How do you perceive our country, is it as you have imagined it before the beginning of your mandate?

I have now been working in Moldova for almost one and a half year, a period full of impressions and new experiences. I entered the diplomatic service in 2000 and I  have previously worked in different functions at the Ministry for Foreign Affairs and abroad and I have been following the developments in Moldova for many years in different capacities. I clearly remember my first visit to the country as a desk officer for Moldova at the Ministry for Foreign Affairs. Since then, there have been many visits and I carry with me all the meetings I have had with different people.

I have learned that Moldova is a country full of potential to grow and to develop into a prosperous society and what impresses me is all the people I have met, not only friendly and welcoming but also committed to engage in Moldova’s future development.  I see so many dedicated people working for a cause they believe in and I am very glad that Sweden can be a part of supporting their ambitions and goals.

Based on your discussions/communication with the Moldovan officials, but also with the representatives of civil society in Moldova, have you managed to understand how Moldova can be helped?

Sweden is proud to be a long-term partner of the Republic of Moldova, and one of the major donor countries here. We have long bilateral ties and Sweden has been active in supporting Moldova since the early 1990’s with a commitment to support reform efforts and the strengthening of political association and economic integration between Moldova and EU.

Sweden has, from the beginning, been involved in activities where Swedish competence and added value are important. Such areas where Swedish expertise can add value are, as example, the fields of tax reform, of community policing, of human rights, justice sector reform, business development, independent media and confidence building measures.

There are many factors that affect a country’s development and it is very much dependent on the political will in Moldova to make sometimes difficult decisions regarding reforms in important areas. We see the need for reforms in the justice sector, importance of fighting corruption. Ensuring free media, pluralism and a vibrant civil society is also key for a sustainable development of a country

How would you assess the trade and economic partnership between Sweden and Moldova? Could it be improved, are there any opportunities for expansion?

The Swedish Embassy is active in trying to strengthen the economic relations between our countries. The potential for increased economic partnership between Sweden and Moldova is great. Not least because of the Deep and Comprehensive Free Trade Agreement (DCFAT) with the EU. In 2018, almost 70% of all Moldovan exports went to the EU.

Sweden has several development programs in Moldova focused on developing the market economy, including support to SMEs and to ensure greater access to international markets through modernization and increase trade with EU. Our focus for the economic development area is for Moldova to fully benefit from the DCFTA. This includes support to institutional reforms to improve the overall business climate.

Swedish companies are always looking for modern and dynamic partnerships and there are a lot of potentials for that in Moldovan companies and given Moldova’s strategic location in Europe. We see great potential in for example the IT-sector as well as in textiles and agriculture.

In Sweden, there is a state monopoly for the retail selling of wine - Systembolaget. Therefore, it is difficult for foreign wines to enter the Swedish market and, however, 2 Moldovan companies have managed to comply with the requirements of this system. Now, when Moldova produces wines with a Protected Geographical Indication with a country brand “Wine of Moldova”, could the volume of Moldovan wines export to Sweden increase?

There are some great Moldovan wines that have been developed lately by some very talented and dedicated Moldovan wine makers. They have also benefited from the Moldovan Competitiveness Project funding from Sweden.

I believe it is only a matter of time until more swedes discover Moldovan wine and start asking for it and looking for it. Also, recently Moldovan wine was featured at the Stockholm food and wine fair, with Wine of Moldova.

Sweden is among the most important development partners of Moldova. The Swedish Agency for International Development and Cooperation implements projects in the most diverse fields, including democracy; human rights and the rule of law. Also, as it is well known, particularly these areas have been signaled by the UE as having the biggest shortcomings. How can this process be streamlined?

Sweden is supporting closer relationship to the EU by the implementation of the association agreement between EU and Moldova. A commitment to democratic principles, the rule of law, and respect for human rights is at the core of this association agreement but it also forms the basis of for a sustainable development of a country, this also why this area has traditionally been the most significant part of the Swedish development cooperation with Moldova.

With our projects in Human Rights in Moldova we try to contribute to greater awareness and commitment from state institutions to assure that human rights are respected in all areas of life as well as for absolutely all citizens, regardless of gender, language, religion, capabilities, ethnicity, sexual orientation and other features.

State institutions are of course mainly responsible for ensuring human rights, but we also work very actively with civil society to support their role as a contributor to a society that respects human rights. They are important in any democratic society as experts that can highlight issues and contribute to their solutions.

In 2009, at the initiative of Sweden and Poland, the Eastern Partnership was launched to promote the economic integration and political association of the states in the eastern neighborhood of the EU. During 10 years of its implementation, has the Republic of Moldova achieved its objectives?

In our view it is a successful foreign policy initiative – not at least in the way our relations have significantly strengthened, trade has doubled and about 70% of MD trade is with EU. We have opportunities for people to travel and to study across the region. A large number of Moldovan citizens now benefit form visa free travel, from studies and professional exchanges through the ERASMUS+ program as well as trade with the EU. Since 2014, more than 2.1 million Moldovans (over 60% of the population) have traveled to the EU without a visa. And since 2015, nearly 2,500 Moldovan students and academics have benefited from the EU's Erasmus + program.

Much work has been done also in the sphere of legislation, many laws have been harmonized with EU aquis. There is always more to do, and a key question now is to follow up on the implementation of these rules and regulation.

The Swedish Government pays great attention to gender equality on all dimensions. To put it mildly, I should mention that since Sweden opened its Embassy in Chisinau, there have been only chief ladies of the diplomatic mission. Are there any areas not covered by women and how can this be explained?

Sweden is a strong supporter of gender equality in all areas of life and equality is one of the cornerstones in the Swedish society. In Sweden we have an equity goal it is based on a fundamental belief in the equal value of all human beings and also that they should enjoy the same opportunities, rights and obligations.

You probably know already that Sweden, during last years, continues to take an active role in promoting gender equality also in Moldova. Gender equality is a central part of the Swedish foreign policy. Together with UN Women we are advocating for all women’s and girls’ equal rights and the importance of more active participation of women in the decision making process.

Ensuring that women and girls can enjoy their fundamental human rights is both an obligation within the framework of our international commitments, and a prerequisite for reaching Sweden’s broader foreign policy goals on peace, and security and sustainable development.