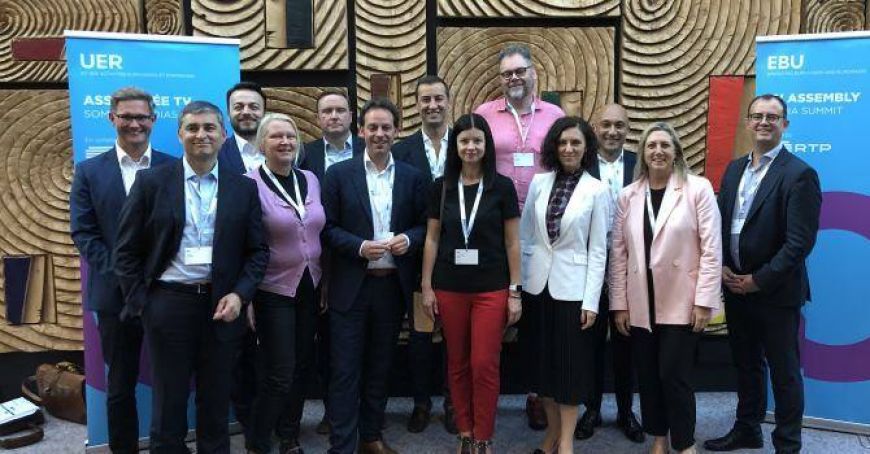 The TV assembly is organized annually and features  strategic themes, exchanges of information and experiences, and information on the results of major studies and projects. The TV Assembly brings together top TV managers of EBU members and articulates members' interests  in terms of overall strategy and policies, implemented by the EBU on  TV issues. It provides a forum for exchange of information and experience among its members, with professional discussions on topics relevant for  TV activities and information of the TV Committee and its expert groups.

The EBU’s TV Committee monitors the TV services of the  EBU and helps with direct operational and strategic activities. The TV Committee monitors the evolution of events, such as the Eurovision Song Contest, Eurovision Junior, approves the television services strategy, manages the TV development fund, and is responsible for the co-production and exchange of programs involving EBU members.

The presence of the Public Broadcaster “Teleradio-Moldova” (TRM)  in the TV Committee is a long-awaited result of a constant and long-lasting effort to promote and consolidate the Republic of Moldova's participation in the European communities. Being  an active member of EBU for more than 20 years, TRM has been rated as a broadcaster with little potential to participate in the EBU's decision-making process. That will change radically after  Olga Bordeianu , president of the Public Broadcaster “Teleradio-Moldova” (TRM) was elected vice-chair of the EBU’s TV Committee. This success is a major step towards strengthening relations with other public broadcasters that have given their vote of confidence, but also highlights the success of the Republic of Moldova at European level. With small steps, but confident, the Moldovan Public Broadcaster gains ground before other media institutions, helping to increase the level of trust not only in the media content produced, but also in its ability to improve relations with foreign partners and to change the attitude, sometimes critical towards  TRM, in particular, and of the Republic of Moldova,  in general.

Efforts of  a long period of time proved the long-awaited benefits of electing the President of TRM , Olga Bordeianu, not as a member, but as vice-chair of the Committee.Therefore, the TRM’s presence at the European level will be visible, not only because it will have more possibilities for exchange of programs, experience, co-production but will have a say in the EBU decision-making process, thus improving the image of TRM  before other top European public broadcasters with longer-term activity and greater financial and human potential.

The committee meets 4 times throughout the year, with remaining business conducted electronically. The mandate is granted for a 2 year period.

After the results of the elections were presented, Olga Bordeianu thanked the organizers and those who voted for her, thus showing her confidence not only as a manager of the national public broadcaster, but also in a small country, but with great aspirations. "I am honored to be elected vice-chair of the EBU’s TV Committee and, at the same time, aware of the importance of the organization, I have the responsibility to contribute to the intensification of co-production with various broadcasters in Europe and to engage in decision-making and organizational aspects of the Committee, so that the results of my work, alongside of the other members of the Committee, have long-term results for the Committee, the TRM, and other radio stations and TV channels in the European countries. Television is a vital component of the broadcasting environment and the objective of the EBU TV’s community is to ensure that by acting  together in the common interest, EBU members can do much more than they can achieve by  themselves", said the president  of the Public Broadcaster “Teleradio Moldova”.

The European Broadcasting Union is the world’s foremost alliance of public service media, representing 117 organizations in 56 countries. It was founded on February 12, 1950. The Public Broadcaster ”Teleradio-Moldova”  has been active member of the EBU  since1993.

Communication and international relations service of the