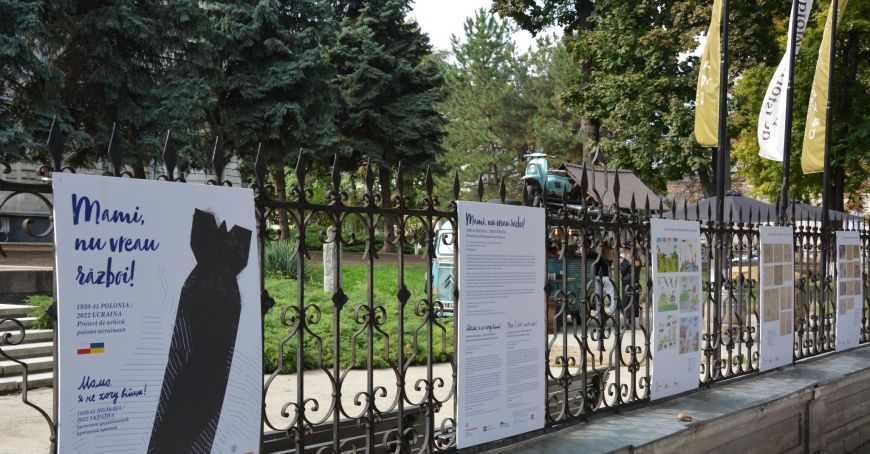 The exhibition "Mami, I don't want war!" was opened at the National Museum of History

A war has nothing beautiful about it. It is fear, flight and damage. It is death and pain. This is how children see a war through their eyes. At the National History Museum of Moldova, an exhibition of drawings made by Polish children depicting their experience during the Second World War and the German occupation from 1939-1945 was launched. Drawings made by Ukrainian children about the horrors in Ukraine were also exhibited here, reports Moldova 1.

The works show what children experience during the war, but also how strong they are.

"It is a very important exhibition, especially because we see the horrors of war through the eyes of children. Children are the most innocent beings and they are the victims of this war and their voice is one of humanity", said the writer Dumitru Crudu.

"It shows us the difference between the 80 from the Second World War and the war that takes place a few kilometres from our country. As children see with the same eyes even 80 years apart, they see the war with the same eyes and ask for help from their parents: Mom, I don't want war!", says Svetlana Gumei, director of the Polish Library.

"The distance between the children's drawings is 80 years. More than 80 years. But, the theme is about the same, the subjects are absolutely identical. The difference is only in the drawing technique, some children 80 years ago used pencils, nowadays they use pencils", says the ambassador of Ukraine in Chisinau, Marko Shevchenko.

"There is no doubt, wars bring suffering to children. And protecting them is one of the priorities of foreign policy, especially of Poland", said Tomasz Kogzdej, the Polish ambassador in Chisinau.

"The exhibition "Mommy I don't want war", which is represented by various posters and drawings made by children, is located on the fence of the museum, on the line of 31 August street. Anyone, if they are interested, can see this exhibition", says Eugen Sava, director of the History Museum.

The works will be exhibited until the end of October.