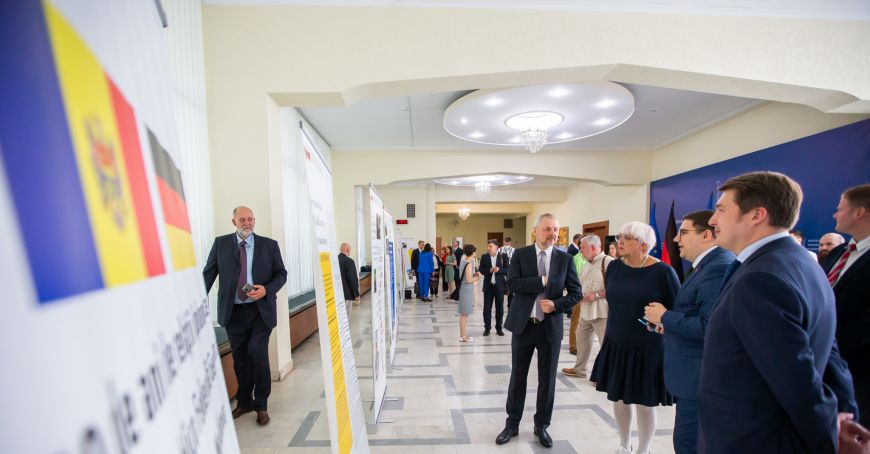 Moldovan-German diplomatic relations established 30 years ago, in pictures. Exhibition, hosted at the MFAEI

Three decades of diplomatic relations between the Federal Republic of Germany and the Republic of Moldova were presented in an anniversary exhibition at the Ministry of Foreign Affairs and European Integration (MFAEI). The images mark the Moldovan-German cooperation in the economic, social and cultural fields, Moldova 1 TV reports.

Hundreds of thousands of citizens have benefited from multidimensional projects, implemented with the support of the German state.

"The 30th anniversary of the establishment of diplomatic relations is also a good opportunity to reaffirm our common commitments to strengthen dialogue and cooperation on areas of interest at all levels, and we have extremely rich cooperation," said Vladimir Cuc, State Secretary of the  Ministry of Foreign Affairs.

"The field of culture has many directions and then in each direction there was a fruitful cooperation. The cultural product must be consumed by someone. If we produce a cultural product only for ourselves, that's a little bit, we have to reach out to foreigners ", says Sergiu Prodan, Minister of Culture.

German officials were impressed by the cooperation of the two states, but also by the attitude of Moldovans towards refugees.

"A small country with a big heart - what a perfect description to represent the Republic of Moldova. It gives me the pleasure to look back on all the cooperation and partnership between the Republic of Moldova and Germany in the last 30 years, an important partnership for both countries ", says Claudia Roth, representative of the German Government.