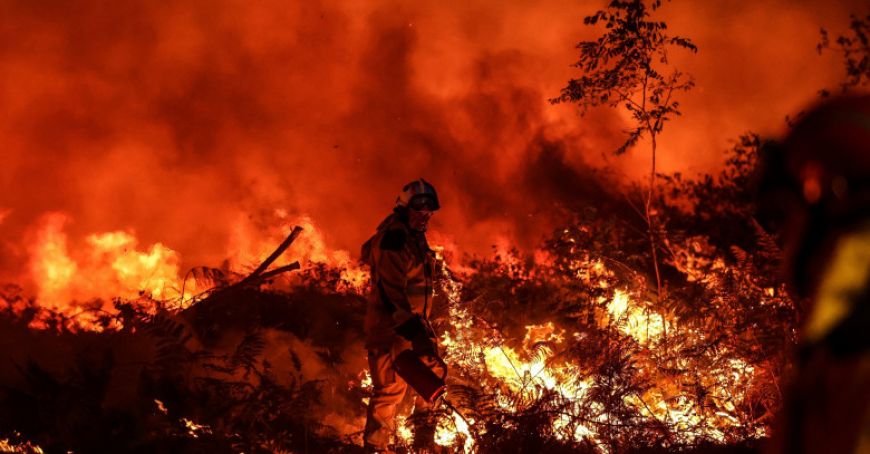 Several European countries are experiencing exceptional heat, also attributed to climate change. For several weeks, fires of proportions taking place in Portugal, Spain, Greece and Montenegro cannot be controlled and are wreaking havoc in forests, fields and even national reserves. France and Slovenia are facing the challenges with difficulty, and the saviours from Poland and Italy came to their aid. In many areas, the threatened population is being evacuated, reports Moldova 1.

France is unable to control a huge fire that has so far engulfed more than 7 thousand hectares in the southwest of the country, near Bordeaux. Several houses have already been engulfed in flames, and approximately 10 thousand people have been evacuated. In the Gironde region, firefighters are at the limit of their powers. Their interventions are made difficult by the strong wind and high temperatures that reach 39 degrees Celsius. Despite all efforts, the fire continues to advance.

"We are afraid that the fire will break out again."

After France made a request through the European mechanism and requested support for ground and air intervention, rescuers, equipment and special aviation will be sent from Austria, Germany, Greece, Poland and Romania.

In Spain, forest fires continue to affect the region of Galicia, where more than 2,300 hectares have burned so far, so that around 22 thousand hectares of vegetation in the country would have been reduced to ashes since the beginning of summer. Portugal has not yet succeeded in extinguishing the fire that has been consuming, for almost a week, a national park in the centre of the country. More than a thousand firefighters were mobilised in the area. At the same time, dozens of people were evacuated as a precaution, after the fire got closer and closer to their houses.

"Nobody expected something like this. The fire spread quickly, especially on the last day. It has already turned practically the entire area of ​​the Serra da Estrela Natural Park to ashes. We have never seen anything like this. Never!"

Numerous fire crews battled a large fire that broke out in a pine forest on the Greek island of Thassos in the North Aegean Sea. According to the Greek media, the special aviation was trained in the extinguishing efforts. Several groups of volunteers were also mobilised.

In Montenegro, the dangerous fire reached close to the tourist areas. A vast fire broke out above Roşii beach in Bar. The fight against the flames was made difficult by the strong wind and the inaccessible terrain, but it was possible to locate the fire without causing any casualties. Slovenia with the help of Italian firefighters managed to take control near the village of Socerb, southeast of Trieste. The efforts of the rescuers and volunteers were successful after the wind subsided and the temperatures dropped.