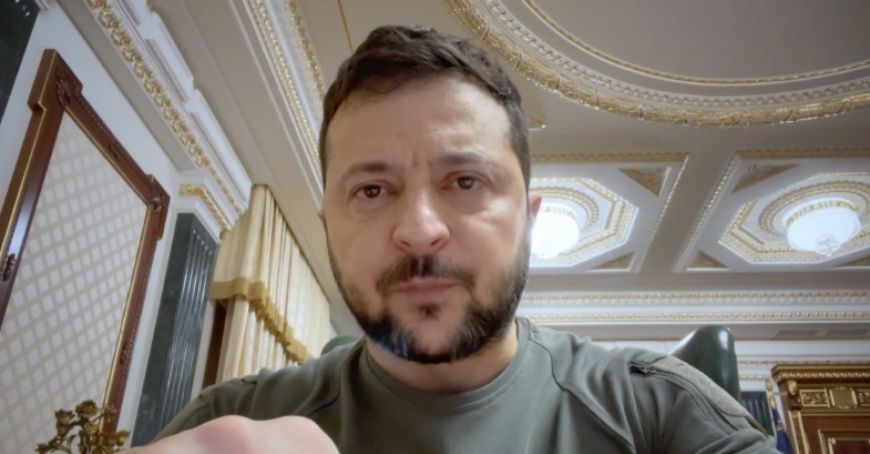 Zelensky on Ukraine's accession to NATO: "I am confident that we will implement this project"

Ukrainian President Volodymyr Zelenskiy said, in a new speech, that he is confident that Ukraine will "implement the project" of joining NATO, he also spoke about the joint statement of the leaders of nine states, including Klaus Iohannis.

"Today we have a strong joint statement by the leaders of nine NATO states, the Czech Republic, Estonia, Latvia, Lithuania, North Macedonia, Montenegro, Poland, Romania and Slovakia. They condemned Russia's actions and, most importantly, supported our aspiration to become a full member of NATO. We are going in this direction. I am confident that we will implement this project," Zelenskiy said in his speech on Sunday evening.

He also spoke about his wife Olena's visit to Turkey, together with a delegation of Ukrainian officials.

"Important things happened today (n.r. - Sunday) in Turkey, during the visit of the First Lady of Ukraine, the head of the presidential administration and other representatives of ours. In Olena's presence, the first corvette among those to be built for our country by Turkey was launched. It is the Hetman Ivan Mazepa corvette. The construction of the corvette started in 2021. (...) There is no reason for our project to build a new fleet for Ukraine to fail. We will implement all plans. Our goal is to create a full-fledged base for building and maintaining ships in Ukraine.

Andrii Iermak and the Ukrainian delegation visited the facilities of the Baykar company, which produces especially the well-known Bayraktar drones for us. (...) However, this meeting is not symbolic, but a practical one. We are preparing to create a Baykar training center and factory in Ukraine, as well as to jointly manufacture aircraft engines. We will certainly implement these projects", said Zelenski.

"Ukraine was and always will be one of the European centers for the military and aviation industry. And I am proud that I can say these words absolutely justified, based on the results of the 221st day of Russia's war against our country.

There was also a meeting between the first ladies of Ukraine and Turkey - and I thank President Erdogan and his wife Emine for their ongoing support of our efforts to restore peace," the Ukrainian leader added.

Zelenski also mentioned that he spoke again on Sunday with French President Emmanuel Macron, among other things about "pseudo-referendums".

"Today I talked with the president of France, Emmanuel Macron. We talked in detail about the situation at the front, our successes at the front. President Macron clearly supported our state and condemned Russia's pseudo-referendums and the attempted annexation of our territory. The tightening of sanctions against Russia was also discussed. We also talked about the situation at the Zaporozhye nuclear power plant and the kidnapping of ZNPP general director Ihor Muraşov by the Russian occupiers. This is yet another manifestation of Russian terror, for which the terrorist state must bear a greater punishment," he explained.

"Recently, someone somewhere organized pseudo-referendums, and when the Ukrainian flag returns, no one remembers the Russian farce with pieces of paper and annexations. Obviously, with the exception of the organizations that watch over the observance of the law in Ukraine. Because all those involved in any form of aggression against our state will be punished", said Zelenski.