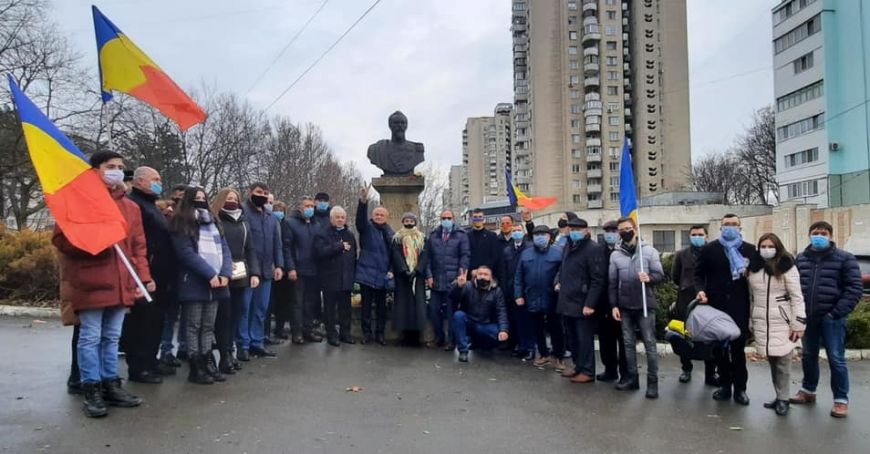 The Day of the Union of the Romanian Principalities, marked in Chisinau

Today marks the 162nd anniversary of the Union of Romanian Principalities, made by Alexandru Ioan Cuza on January 24, 1859. According to historians, this event marked the history of the nation and laid the foundations of the Great Union of 1918. "Longing for dignity, longing for unity." is the historical-cultural stop that brought together many people at the National Library of Moldova this morning, and several unionists, as well as the Romanian Ambassador to the Republic of Moldova, Daniel Ioniţă, laid flowers at the monument of Prince Alexandru Ioan Cuza, reports Moldova 1.

The literary-musical medallion "Let's join hands with those with a Romanian heart" brought back the event of 162 years ago.

"The small Union was possible in the conditions when it was considered that there is only one civilizational space - the Romanian space and it is absolutely necessary for it to be completed in order to become a force," said Victor Juc, director of the Legal Research Institute.

"The craftsmen of the Little Union were the ones who built this country. Besides Alexandru Ioan Cuza, it was Vasile Alecsandri who also made the first Hymn of Romania, which would be an example for the unification of all Romanians, for the realization of his ideal," mentioned Boris Volosatâi, Member of the Romanian Parliament.

In the same idea of the destiny of our people in space and time, was the launch of the book “Sovereignty of the Republic of Moldova. Concept and reality", which brings together the communications from the online scientific conference that took place in Chisinau in June 2020 on the occasion of the 30th anniversary of the proclamation of Sovereignty.

"The focus of this book is that once broken by the Russian Empire, the Soviet Empire - we are obliged to defend the Independence and Sovereignty of the Republic of Moldova, if we want to survive as a nation on this territory," said Anatol Petrencu, director of the center "Pro memoria" .

The book was published with the financial support of Chisinau City Hall.

"I congratulate the authors of this book on 30 years of Sovereignty, we want a lasting and real Sovereignty," said Alexandra Moţpan, head of the mayor's office.

"This kind of event must be promoted, the young generation must participate in order to know the historical truth and create the future," mentioned Viorel Bolduma, professor of the center of excellence in constructions.

"I am sorry that today some young people do not understand how important it is to know history, to know the important events that happened to the Romanian people. I am proud to be Romanian, I will continue to say this," mentioned Liviu Pasha, student.

Meanwhile, several unionists laid flowers at the monument of Prince Alexandru Ioan Cuza in the Botanica sector of the capital. According to Ambassador Daniel Ioniţă, the Union of the Romanian Principalities of January 24, 1859 laid the foundations of Greater Romania.

"It is an extremely important moment for all those who feel Romanian. The first birth certificate of today's Romania, modern Romania, Romania perfectly integrated in the European and Euro-Atlantic structures. Without that visionary and courageous moment of the political leaders of that time, the Great Union of 1918 would not have been possible," declared Daniel Ioniţă, the ambassador of Romania.

"An important day for our nation, it remains in history to be the first step for the realization of the Romanian unitary national state on December 1. It is a worthy example to follow and such a ruler faces us, we are proud of such people," mentioned Vlad Biletchi, president of "Unirea-ODIP".

The President of Romania, Klaus Iohannis, also sent a message on the occasion of the 162nd anniversary of the Union of Romanian Principalities. According to the official, many of the ideals that animated the unionists of 1859 still animate the Romanians.