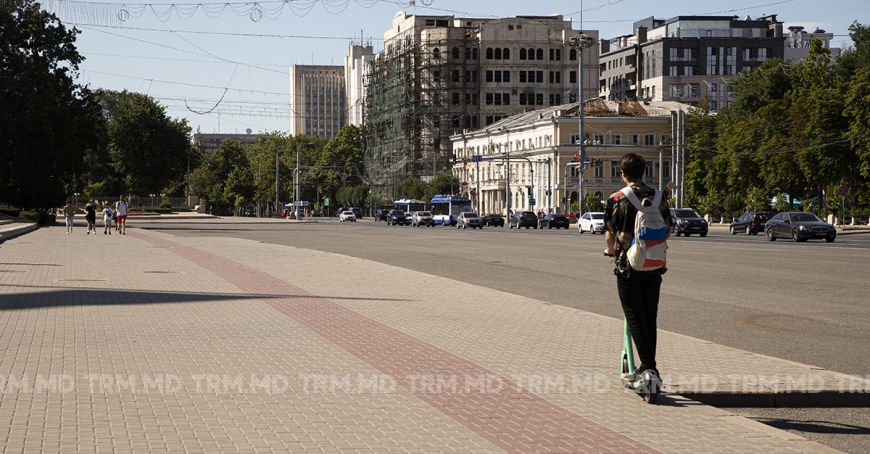 New rules for the owners of electric scooters, who are more and more often involved in road accidents. The authorities proposed to increase safety on the streets and drew up a set of rules for the use of this means of transport, reports Moldova 1.

From today, the speed limit for electric scooters in parks and congested areas of the capital will be 15 kilometres per hour, 10 kilometres lower than before.

This measure will be implemented by the operators who offer for rent such means of travel. Also, the areas with speed restrictions are indicated in the electric scooter rental application.

The measure was necessary because with the increase in the number of scooters, the number of accidents involving the users of these means of transport increased.

"Such measures have been taken to limit the speed in certain areas of danger or where accidents have occurred. Previously, we had limited speed in parks as a precaution. In the same way, we stuck stickers on each scooter, which notify the users, what the rules are, what they must not do and what is recommended", explained Sorin Chiriac, the representative of a scooter rental company.

"We have the possibility to set the speed limit related to the geographical position, in the rental application. These areas will be delimited with reduced speed," added Dan Casapciuc, the administrator of a scooter rental company.

"It's practically the whole centre of Chisinau, Ştefan cel Mare street, the parks and squares in Chisinau are also taken into account," said the deputy head of the National Public Security Inspectorate (INSP), Alexei Grosu.

The authorities recommend all those who use this type of vehicle to use protective measures.

"When you buy a scooter, you must also buy protective equipment, because it preserves your health", explained the head of the prevention department at INSP, Oleg Rusu. The officer referred to the luminous vest, helmet, armrests, and other protective accessories.

People welcome the initiative and say it is a good disciplinary measure.

"It's a good idea to reduce the speed, but an even better idea would be to notify those who use the scooters not to walk on the road where the cars are going." "It's very important because there are risks that children go ahead, you stay behind and they might bump into them, hit them, that's 100%."

Since the beginning of this year, 50 road accidents involving electric scooters have been registered, one of which resulted in the death of a person.