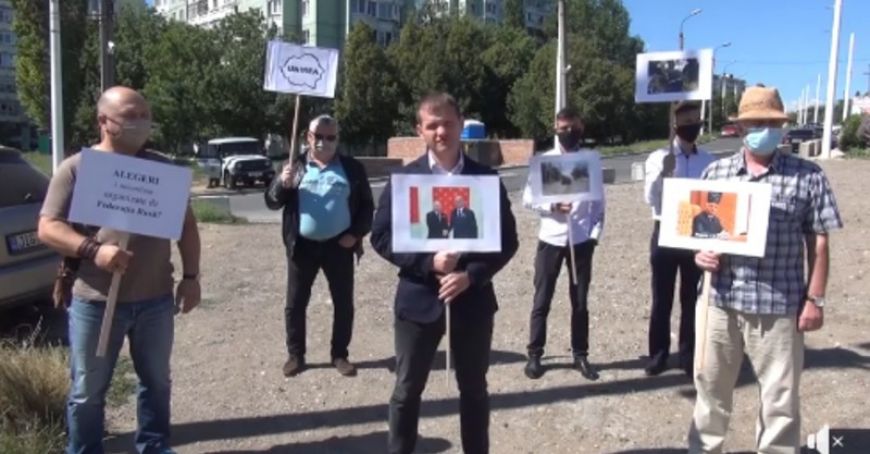 They condemn the unilateral installation of checkpoints by the Transnistrian separatist regime. The "Unirea" Political Movement protested today in Varniţa, Anenii Noi, in front of a post illegally installed by the unconstitutional authorities in Tiraspol. Even more veterans of the Dniester war warn that they will block the route on the Transnistrian segment if the posts are not removed in 48 hours. Meanwhile, during a telephone conversation with the head of state, Igor Dodon, Vadim Krasnoselsky pointed out that most of the stations have already been dismantled, reports Moldova 1.

Armed with placards, representatives of the "Unirea" Political Movement called on deputies to set up a parliamentary commission of inquiry to investigate the installation of checkpoints, as they say the rights of citizens on the left bank of the Dniester are being violated.

Members of the National Council of War Veterans have also issued a statement condemning Tiraspol's unilateral actions. They have issued an ultimatum and say they will block the route on the Transnistrian segment, from Sănătăuca to Hagimus, if the checkpoints are not dismantled.

"If for 48 hours, starting at 12:00, today, these posts will not be swept from there and citizens will not have free access to one side or the other, we reserve these 48 hours to mobilize veterans, people of good faith, civic activists and the entire civil society, to block all routes," says veteran Anatolie Macovei.

On the other hand, the Deputy Prime Minister for Reintegration, Cristina Lesnic, had a meeting on Tuesday with the inhabitants of Hagimus village from Causeni district, located in the immediate vicinity of Bender town, in the security zone. This is after the local administration notified the Reintegration Policy Bureau regarding the multiple security issues related to the commercialization of agricultural production and free movement, many inhabitants of the village being employed in Bender. In this regard, the Chisinau authorities have given assurances that they will intensify the dialogue with the Transnistrian side.

Meanwhile, the head of state, Igor Dodon, spoke on Monday with the so-called leader of the Transnistrian region, Vadim Krasnoselsky. The latter stated that Tiraspol installed a total of 31 such stations, but after the state of emergency in the Transnistrian region was lifted, half of them were dismantled. However, the so-called leader says the rest of the posts will not be removed as long as the epidemiological situation does not improve. Igor Dodon says all these issues will be addressed in the bilateral meeting with Krasnoselsky, which would take place at the end of July.

"Our position remains the same. We are a neutral country and we must find a solution, including with the military troops from the left bank of the Dniester, in the context of the territorial integrity of the Republic of Moldova," said President Igor Dodon.

TRM.MD recalls that, during the state of emergency, Tiraspol illegally installed over 30 posts around the localities under the control of the constitutional authorities, and the attempts of the military observers from the Joint Peacekeeping Forces to travel on the spot to document the violations were blocked each time by the Transnistrian side. Recently, the Unified Control Commission announced that the Transnistrian side refused to examine, at the meeting of the structure, the issue related to conducting a complex analysis of the situation in the security zone. No solution was found for the movement of military observers to investigate illegally installed posts.