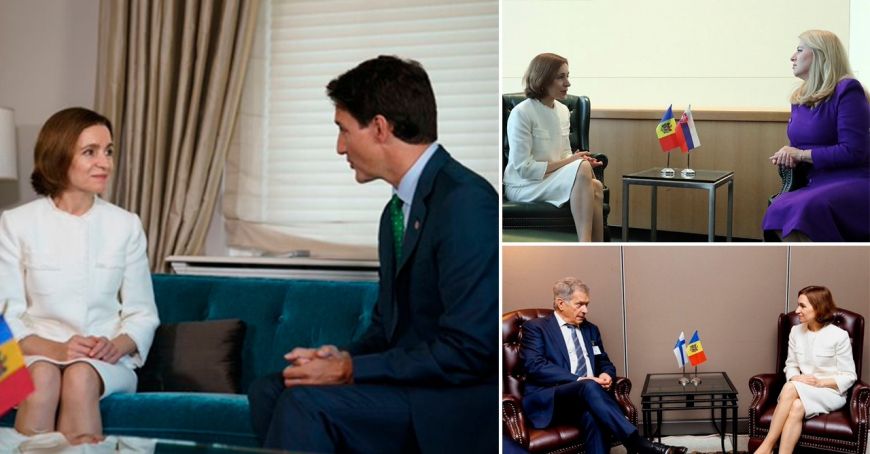 Maia Sandu at the UN: More and more countries are supporting the path and reforms of the Republic of Moldova towards the European Union

The security situation in the region, its consequences for the Republic of Moldova in the economic and energy sectors, as well as the reform agenda were the topics discussed by the head of state, Maia Sandu, during a meeting with the Prime Minister of Canada, Justin Trudeau. During the discussion, Maia Sandu expressed her gratitude for Canada's support in the democratic transformation and the European future of our country.

"Canada is with Moldova and, together, we are with Ukraine. I said this before and I reiterated this feeling when I talked with the president Maia Sandu. We also talked about supporting Ukrainian refugees, defending democracy and ensuring security in the region," Justin Trudeau wrote on Twitter.

During her visit to New York, President Maia Sandu met with her Finnish counterpart, Sauli Niinistö. The two heads of state exchanged views on the war in Ukraine, security in the region and Russia's partial mobilization. Finland supports Moldova's path and reforms towards the European Union.

The leader from Chisinau also had a meeting with the president of the Slovak Republic, Zuzana Čaputova. The two heads of state spoke about the consolidation of Moldovan-Slovak relations and the security situation in the region.

Maia Sandu thanked President Čaputova for the humanitarian aid received by our country in the spring to manage the refugee crisis in Ukraine. Likewise, she expressed her gratitude for Slovakia's support of our country's European approach, but also for the assistance received over the years through the Slovak Agency for International Cooperation and Development, "Slovak Aid".