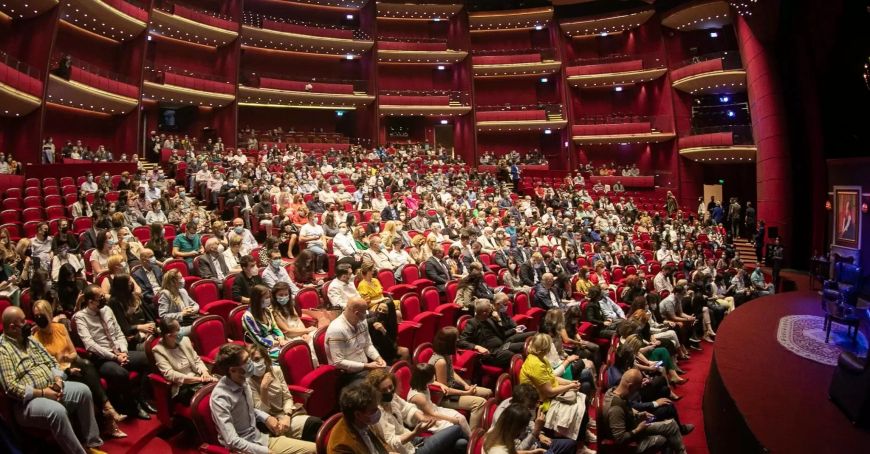 The Romanian Minister of Culture, on Radio Moldova: The National Theater Festival in Bucharest - a strategic project for the rapprochement of the two banks of the Prut

The National Theater Festival (FNT) in Bucharest remains a strategic project for the Romanian Minister of Culture, even more so the more the states in the region get closer, united by the same threat. According to Lucian Romaşcanu, a new theatre in Buzău, Romania, led by Petru Hadîrcă, as well as independent projects, detached from the direct involvement of the authorities, would bring the culture of Romania and the Republic of Moldova even closer. Statements in this sense were made by the Minister of Culture of Romania, Lucian Romaşcanu, for Radio Moldova.

"FNT is extremely important, because it manages to gather the best productions from Romanian theatres and not only. I am happy that Hadîrcă's "Trap" from the National Theater in Chişinău also exists. So it is an extremely important phenomenon, which has 32 years behind it and which carries forward the Romanian cultural phenomenon. The FNT is among those strategic projects that the Minister of Culture supports and we are proud to be," said Lucian Romaşcanu in an interview given to Radio Moldova correspondent in Bucharest, Alex Olaru.

Lucian Romaşcanu qualifies the cooperation between Romania and the Republic of Moldova in the cultural segment as a productive one. The Romanian minister mentioned, in this sense, the National Theater Meeting organised in Chisinau annually, but also other cultural events, which according to him, come to bring the two banks of the Prut closer together.

"Cooperation works with or without the involvement of the authorities because the cultural phenomenon is like water, it passes, transits and sees its interests, and joint Romanian-Moldovan and even Ukrainian manifestations are the order of the day throughout the country. In addition, we have the Reunion of National Theaters in Chisinau, where last year for the first time we managed to bring all the national theatres from Romania. Another example: in Buzău, it was decided by the local council to build a theatre whose director and first troupe will be Petru Hadîrcă from Chişinău, together with the troupe of the National Theater from Chisinau. There are many things that are done and we do them together at the governmental, inter-theatrical level, but I repeat, there are many manifestations of the soul, which do not necessarily have to go through an authority to happen'', Lucian Romaşcanu also declared for Radio Moldova.

TRM.MD recalls that the 32nd edition of the Romanian National Theater Festival takes place in Bucharest, between November 5-13. In this year's edition, the show "Trap" after "Fuga" by Mihail Bulgakov, directed by Petru Hadârcă, was performed on the Romanian stage, staged at the "Mihai Eminescu" National Theater in Chisinau.

The interview given by the Romanian Minister of Culture, Lucian Romaşcanu, was made public on October 13, during the "Weekend Radio Morning". The show can be heard in its entirety HERE.