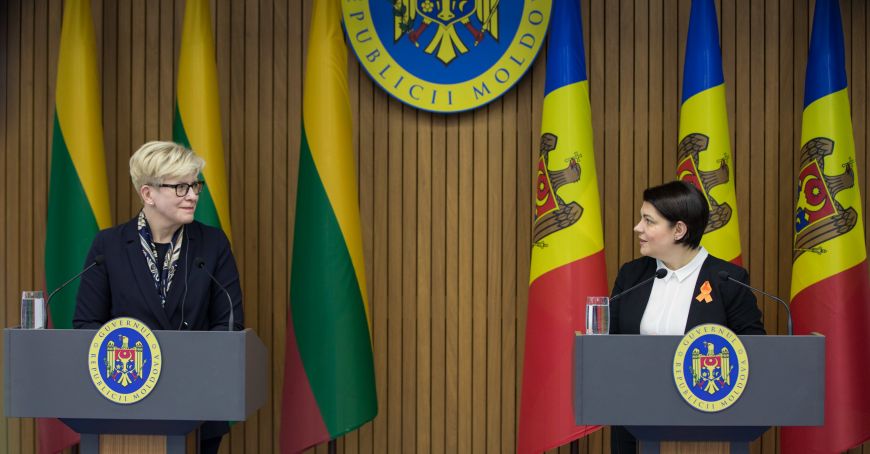 Lithuania could contribute to the energy security of the Republic of Moldova. In this context, the technical possibilities of delivering liquefied gas from the floating terminal located in the port of Klaipeda on the Baltic Sea are to be analysed. This aspect was discussed by Prime Minister Natalia Gavriliţa with the head of the Vilnius Executive, Ingrida Šimonytė, who is on a working visit to Chisinau.

Energy security was one of the main topics of discussion that the head of the Chisinau Executive, Natalia Gavriliţa, had with the Prime Minister of Lithuania, Ingrida Šimonytė. In a press briefing, Natalia Gavriliţa stated that Lithuania had always stood by the Republic of Moldova, helping it overcome the crises it faces more easily, including the energy crisis.

"The most recent examples being support in strengthening resilience, especially combating propaganda, fake news, granting scholarships and funding for young people, assistance in the humanitarian field and, of course, assistance in everything that means European integration. Our country must identify as many alternative sources of natural gas as possible, access bilateral electricity contracts, have support in procuring and obtaining generators", declared Prime Minister Natalia Gavriliţa.

The terminal in the port of Klaipeda contributed to Lithuania, starting from May of this year, being the first European country to obtain energy independence from Russia, and it also became a regional strategic object. If from a technical point of view it is possible, then liquefied gas could be delivered to the Republic of Moldova from this terminal, stated the Prime Minister, Ingrida Šimonytė.

"This is indeed an example of regional cooperation. We have analysed the steps to be taken to support Moldova in that situation and if there is a technical solution, we will, of course, proceed to analyse what the practical arrangements would be for them to be implemented", declared the Prime Minister of Lithuania, Ingrida Šimonytė, on a working visit to Chisinau today.

TRM.MD recalls that the liquefied natural gas terminal in Klaipeda, called "Independence", was inaugurated in 2014, to stop dependence on Russian gas.