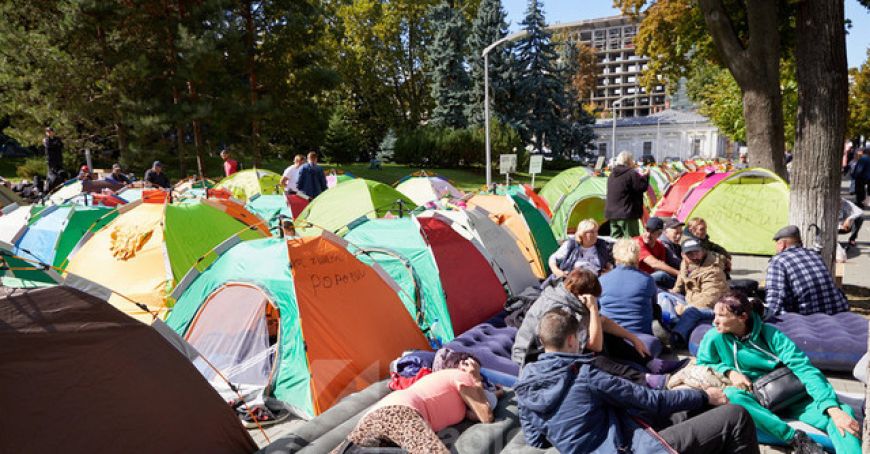 In the last three weeks, the protests organised in the centre of the capital by supporters of the "SOR" party took place with a lot of violations, the Police informs. As a result, the law enforcement officers drew up 40 contravention procedures.

These refer to disobedience, hooliganism (urinating, smoking, vomiting, alcohol consumption in a public place), insulting law enforcement officers, the presence of people with criminal records among the protesters, violation of the legislation regarding the special protection of children in a situation of risk, the intentional blocking of the roadway, the limitation of press access and the assault of journalists during the activity of mediating the events. At the same time, an investigation was started for the threat or violence committed against a person with a responsible position.

The police claim that they have sent six reports to the town hall with information about all these violations and have asked to change the schedule of meetings or even stop them, reminding that it is the duty of the local authorities to take care of the smooth running of the events and cleanliness in the city. Because the mayor's office did not react, the police addressed the court with the request to compel the local public authority to suspend the protests.

"The police do not have the purpose of restricting the citizens' right to free expression, but they should be held responsible, without infringing the rights and freedoms of other people".

Natalia Ixari, mayor Ion Ceban's communications adviser, came up with a reaction. She mentioned that "it is the competence of the police and other legal bodies to ensure public order and public security, and in certain circumstances, if necessary, to apply sanctions".

"Municipal services have ensured and will ensure, according to their competences, the sanitation of green and public spaces. For the time being, various methods are being used to force the City Hall of the capital to stop or prohibit the protest in front of the Parliament and the Presidency (...). We recommend the central authorities and the police to be guided by international practice and to act in accordance with the legislation", wrote Natalia Ixari.

TRM.MD recalls that the members and sympathisers of the Shore Party started the protests on September 18.